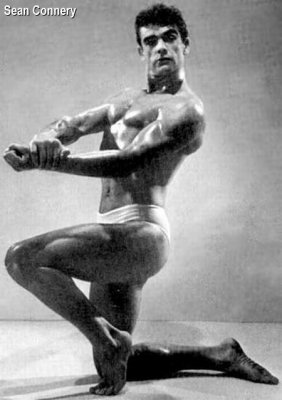 JAMES BOND WAS A BODYBUILDER???

Ten years ago when I won the Washington State Ironman Women's Masters Bodybuilding, I wrote an article for a natural bodybuilding website about bodybuilding and steriods. I am going to touch on the topic in the same way I did back then, for I, for some reason am getting quite a lot of people asking me questions on this topic. Recently, there have been a few television shows on women and steriod use. Unfortunately, they are interviewing extreme female bodybuilders, covering why they do it, what their life is life off stage, and various other obsessions involved in that type of lifestyle.

They never cover the female bodybuilders that do not take steriods, and have muscular physiques, that DON'T have freaky faces and voices, like myself.

Now since I have made that statement, let me make myself clear. Between the years of 2003 - 07, I dabbled with various thyroid drugs, some Winstrol and Primobolin, but never any hardcore testosterone drugs. I will say that I was doing fine, for "myself" before I messed up my thyroid. But because I have been practicing "resistance training" since I was a teenager, I know for a fact that the muscle that is on my frame is tried and true through discipline from the exercise, and nutrition, especially red meat and dark leafy greens. At fifty years old I can kick ass as I always have.

HOWEVER, this does NOT mean I am against anyone that chooses to use steriods, providing they are old enough to truly understand the side effects. I have always been an advocate to discourage anyone under the age of thirty to touch the drugs, for I had people in my life when I was that age explain to me why "I" didn't want to do them (even though they did), and to this day I am forever thankful. In fact, when you hear about any tragedies involving steriods, it is always teenagers. Poor kids are already messed up with hormone confusion. That mixed with mega hormones is always a cocktail for tragedy.

Most of the time when you hear about the terrible deaths of adults involving steriods, 98% of the incidents, chances are there are other drugs (recreational) involved. I know, unfortunately, many deaths of people that happen to do steroids that died tragically, but it always involved some severe recreational drug.

So lets touch the pro bodybuilders. These are NOT sports competitors. No one is running faster, jumping higher, dancing better........ These people are artists. As I say, and have always said on my cover page of my site, the body is a canvas. The food, training items, and discipline create the product of the canvas. Then you go on stage and you have a dozen judges deciding which one they happen to like better on that given day. Don't think for a second there aren't favorites, especially in the pro level. As long as the person using is keeping it to themselves, and not pushing the idea of doing to anyone, there should not be a problem. IT IS AN ARTFORM!

It is interesting how it is sort of okay for musicians, actors, writers, and other artists to be alchoholics or drug abusers. It is common knowledge that it expands their creativity. This is okay? But someone who is doing another type of drug that enhances their physical abilities to create a physical artform is deplorable?

Okay, so what about people like me, the majority of "resistance training" junkies who are put in the same category as bodybuilders, who you see around with accentuated delts and biceps? It is ALWAYS the same questions; "Are you a bodybuilder?" "Do you take steriods?" It never makes me angry (especially since I have played with stuff in the past,,,,,briefly), but it gets so redundant. People like me most likely (especially at my age) choose to go this route for many reasons. 1. NATURAL endorphine high. So let me appologize right now to all of my casual friends who find me completely boring since I don't get high or drink. I prefer to do it in a way that doesn't destroy my mind or liver. OR self esteem. 2. Injury prevention. 3. Hygiene. 4. Overall health. 5. YES, to look good in whatever clothes I want. These are the reasons for the average person that likes to "work out". Understand...of the 34 years I have been resistance training, only 9 years did I compete in bodybuilding. Not to say I won't again, but so far only 9 years on the stage.

There is another category of people that have found solace in resistance training. I know many people with diabetes that find it wonderful, for they have to eat carefully anyway, and when you are preparing for a bodybuilding competition you have to eat pretty much like a diabetic. I know people that have had deblitative accidents that have almost completely healed themselves, when told they would never be the same. Even people in wheelchairs are going into gyms to "pump iron" and love it.

There are many, many people now that have turned to exercise instead of pharmaceutical drugs to make their life better. It is such a horrible thought to be at the mercy of a doctor and the government to just prescribe a drug and say you'll be better as long as you spend the money and "take this" for the rest of your life. Oh yea, and never tell you it will slowly kill your liver. Not being paranoid, its just a fact. Don't attack me on this. I understand that there are a lot of people that have to take the medications, its just that their are a lot of people that are finding out the "cocktails" prescribed can be reduced significantly.

As an avid exercise enthusiast/bodybuilder, let me just say; You can pick on me all you want, I have heard it all so at this point it goes in one ear and out the other. After 34 years of training, I am confident enough to know I am still healthy, I don't break, and still love what I do.

And I am always inspired and excited about my clients and friends that compete in the bodybuilding/fitness world, for they are always content with thier lives and LOOK HEALTHY AND HAPPY!!!

A PEARL IS A TEMPLE BUILT BY PAIN AROUND A GRAIN OF SAND. WHAT LONGING BUILT OUR BODIES AND AROUND WHAT GRAINS??......Kahlil Gibran