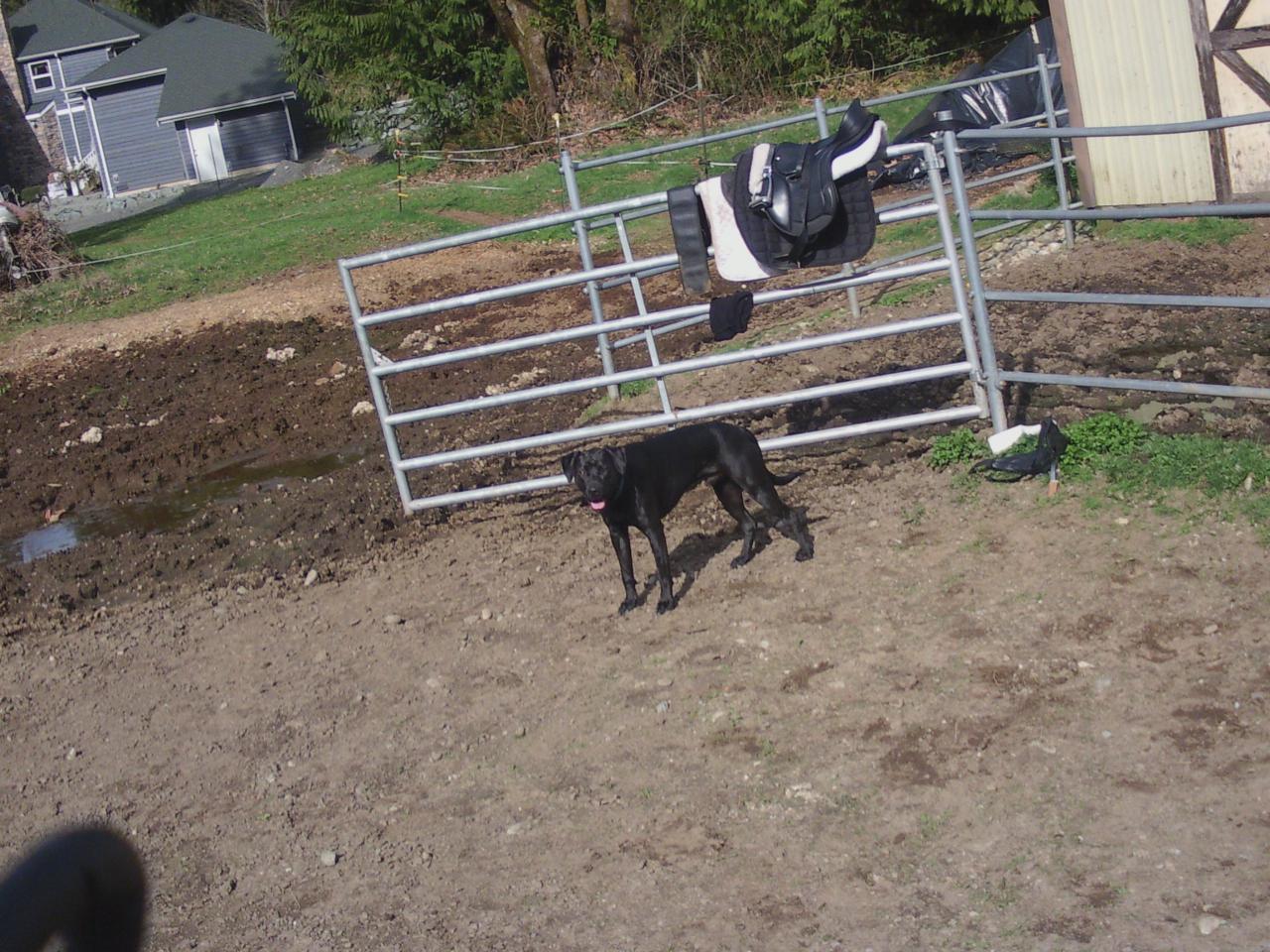 A while back, I was out on my front porch and I looked over yonder.  There was a strange, beautiful black dog at the far end of my front yard.  I quietly told him to go home, for I did not want my Lucy and Lola to see him.  He barked a couple of times and ran off.  Periodically, he would return and I would watch him.  Each time he would come further into my yard.  I still did not want him to get use to the place, for one, I did not want to have to clean his shit off my lawn.

Then one day I came home from the gym and as I drove up the driveway, I interrupted him sleeping on my front lawn in the sun.  He took off when he saw me, but I sort of felt bad, for he was so relaxed until I came home.  It turns out he lives across the road in a little white house that is in a center island between my road and the road that runs along the lake.  Not much of a yard and no fencing.  So now I was feeling like he needed my space to feel free and relaxed.

As I drove past his house one day I saw a girl in the front yard so I stopped and asked his name.  It was Oliver.  I let her know he was crossing the road and it could be deadly someday with the traffic going by.  He continued coming over.  But now I know his name.  Finally the inevitable happened.  Lola saw him.  Now I have both Lucy and Lola following him to the edge of the property.  My girls are smart enough not to go to the road.  One of the mornings he came up I gave him a milk bone.  Another day he came up when I was ready to take one of my horses up back and he went with me!  Now I am liking him VERY much!  Another morning he comes up early enough to run with us.  So here I am running with 5 dogs and he is just the best mannered boy.  My girls and my moms puppy are terrorizing him and he is just as happy as can be to let  them do so.

It has come to the point where he comes almost every day.  Walks right into my office, eats the dog food in the bowl demands his Denta Bone, Milkbone, and Chicken strip, takes naps with my dogs, like he is one of mine.  He is beautiful, black, shiny, muscular, and so sweet AND he loves to run up back with me.  I enjoy him soooo much and one thing I have learned from the past is, I will enjoy the time he is here, feed him and treat him well, and never get to know his other side.  If the family that owns him doesn't give a crap where he goes when he is let out the door, then it is not my place to let them know.  And if I did, who knows, they might chew my ass out for even letting him into my space (Been there before).  But the way I look at it is, my dogs would NEVER leave my place because they KNOW where their home is and how much love there is here.  Any dog that strays, is looking for attention because it is not given in thier own home.

Made me realize that goes the same for some humans out there too, and I have known some in the past....